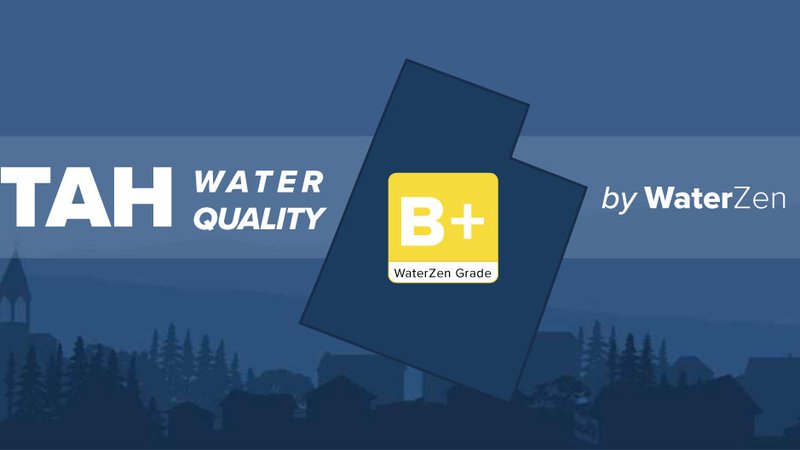 When levels of lead and copper contamination in local water supplies are examined, how does Utah compare to other states?

WaterZen.com has compiled data for lead and copper in the water supplies of nearly 1,500 water providers that serve around 255 million Americans (about 77% of the nation). With this data, WaterZen developed a methodology to grade water quality and provide useful comparisons between states.

The water quality grade is based on the average lead and copper levels of each state's five largest water providers by population.*

Utah earned a B+, which is pretty good when compared to the national average.

Utah scored higher than neighboring states such as Colorado, Nevada, and Oregon, but lower than Arizona, Idaho, New Mexico, Washington, and Wyoming.

Here's a table comparing WaterZen's grade for Utah with the grades for neighboring states:

The most common way lead and copper enter a water supply is through lead- and copper-based plumbing materials, including pipes, faucets, fittings, and solder.

These can corrode over time and leach lead and copper particles into drinking water. Corrosion occurs if water has low mineral content or high acidic content, or if the water sits in the pipes for several hours.

It's estimated that more than 10 million homes across the country receive their water through lead pipes.

As of 2011, the US Congress mandated that all pipes and other plumbing materials must be free of lead, which means that most newer homes are built with safer pipes. However, if a home was built before then, there's a reasonable chance the pipes or fixtures contain some lead.

For more information on copper or lead in drinking water, check out WaterZen's in-depth guides.

Testing and Filtration Recommended for Everyone

Why are these water-quality grades important for residents of Utah to know and understand?

Even in modern-day America, monitoring and filtering water quality is the smart thing to do. Incidents of dangerously high lead or copper levels in water supplies and the resulting damaging health effects on local residents continue to occur.

For example, a USA Today Network investigation in 2017 found that 2,000 water systems across all 50 states serving 6 million people had levels of lead contamination that exceeded the EPA's legal limit. About 350 of those systems provided water for schools and day-care centers.

A similar investigation by Reuters in 2016 uncovered nearly 3,000 areas across the US that had lead-poisoning rates higher than those found in Flint, Michigan during that city's lead crisis. Such high levels of lead poisoning harm children, infants, and fetuses much more severely than adults.

These are reasons why WaterZen recommends that all Utah residents install some kind of water filtration system in their homes to ensure the cleanest, safest water possible. There are many types of water filtration on the market to suit different needs and budgets.

WaterZen also recommends that concerned Utah residents test their own drinking water or have it tested by a professional.

Water quality can vary from city to city, neighborhood to neighborhood, and even house to house. This means, for example, that a house with lead pipes could have poor drinking water even though it sits inside a city with excellent overall water quality.

Another course of action residents can take is to contact their local water provider and demand that specific actions be taken to improve the quality of their drinking water.

Besides giving grades on water quality to states, WaterZen has also assigned grades to individual cities' water providers by averaging the lead level and the copper level for each provider. Learn more about their methodology.

Some providers in Utah struggle to keep lead out of their water. For example, Payson, Logan, and Springville have the highest lead levels in the state, perhaps because of an abundance of old pipes and plumbing fixtures that contain lead.

Other providers such as South Ogden, Clearfield, and Heber have the highest copper levels in Utah.

There are some bright spots, though. Kaysville, Ivins, and Santaquin earned the highest overall grades in the state, and their water providers should be commended.

As mentioned before, WaterZen's state grades were calculated by averaging the water-quality results of each state's five largest water providers. Here are Utah's five largest providers and their grades:

Salt Lake City Earns a B+

Utah's largest city and water provider earned a B+. Here's a closer look at how Salt Lake City's B+ compares to similarly-sized cities across the nation:

More detailed information about the water quality for nearly every city in Utah, whether large or small, can be found at WaterZen.

Each water provider's page contains exact lead and copper numbers, how far those numbers are from the legal limit, comparisons to other cities in Utah and in the nation, and links to water-related news articles and resources.